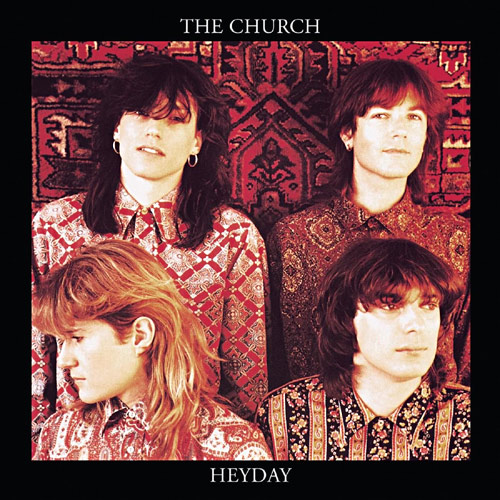 The first thing that the discerning observer will notice about the new Church album is that 8 of the 10 songs are credited to the entire band, rather than just me, as its usually been in the past. This change came about, not because my songwriting has 'dried up' nor, for some obscure democratic (or financial) reason, but rather to explore the inherent musical tensions and reactions that exist between the four players. As a band celebrating its sixth birthday in 1986, The Church have come to a point where we enjoy a certain musical gestalt or intuition, which made it dead easy to turn any song I wrote into the identifiable Church sound. So the real challenge was to compose together, to put our identity to the test, to let five long years of constant playing pay off in a week or two of spontaneous creativity. I feel the result of this gamble is the loosest, warmest, and most musically exciting album we could make.

Peter Walsh - who produced and engineered the album - and himself the result of an intuitive guess by the band for that position, was involved all the way down the line, often summoning performances from the group that had us quite surprised with ourselves. From my view point, I see Walsh not so much as a technical boffin hired to pull big modern sounds, but more as a motivator - someone who could gauge the capabilities of each member - patiently extracting the finest performance for the required part.

When the backing tracks were completed, I then took home a cassette of the instrumental part of the album, and would sit for long periods, listening and letting the music dredge the words from my subconscious, and then trying to get those words to insinuate themselves into the pre-existing order, enhancing - but not changing - the mood of the original piece. The actual recording of the album was relativly smooth, quick and easy; the emotional highlight for me was watching Tony Ansell (the string and horn arranger) conduct the small orchestra and breathe life into our ideas for added instrumentation.

Gradually, in my mind, a theme for the album developed: at first nebulous concept - fame, success, the aftermath and the decline, not just on the small and narrow level of a "pop group" (though that too). But in any and all broader contexts imaginable, hoping to explore this concept with some kind of backwards/forwards hindsight starting with "Myrrh" (an old gift for a new god) and ending with "Roman" (an endless historical feedback loop). I just seemed natural to call this album Heyday.

Shot in locations around Sydney, the intriguing clip for the single "Tantalized" is an effort of American clip-makers Leslie Libman and Larry Williams who also handled the last three Dream Academy clips, including the acclaimed "Life In A Northern Town".

Larry is adding some footage shot in Oaxaca, Mexico, during the "Day Of The Dead" festivities where he zoomed around the town on the hood of a car, capturing the revelers dressed in skeleton costumes on a ghostly night with his trusty Super 8 camera.

Larry is a well known and experienced photographer who has used a few effects in the clip that he discovered in fashion photography. Using cheap photographic filters that produce diffraction rainbows and colorization, he also shot through flames created by metholated spirits burning in film cans. The eerie lighting effects were augmented by using blowtorches, flashlights, and other handheld large lights run around the band while performing. One scene was lit entirely by highway flares.

Another brilliant effect was the use of a sheet of flexible reflective Mylar that then was used to distort and bend the images of the band and background for the camera. Almost all the clip was with handheld cameras, making the clip as frenetic and explosive as possible. Some scenes were shot on an amusement park ride, another at water level on a speedboat zooming into the city with other crowd shots gathered at New Year's Eve in Kings Cross.

The main location was a hilltop overlooking Sydney at dusk, where the band performed the song as the skies darkened. The first night's shoot at this locale had to be cancelled though, because of rain. At the point that the directors had to decide on whether to proceed or wrap, a mammoth thunderclap was all the urging they needed.

But the next day's weather was perfect. The wrap up shots were set in Steve Kilbey's house, underwater at the Sebel Townhouse's pool, and with a transexual dancer who is a dead ringer for Jayne Mansfield. Leslie comments, "The clip is energetically aggressive. It reflects the music in a performance interspersed with hypnotic images." Larry says, "It's video Darwinism. The transsexual dancing is tantalizing and sensual, but on closer inspection, has only the illusion of seduction - larger than life, exaggerated but frightening."

Steven Phillips, Juke magazine, April 1984 "Their unstated sense of mission is still there, of ushering in a new form of beauty - a defiant and sensual challenge to all that's wasted and ugly."

Dave Lewis, Sounds, February 1982 "The Church magically manage to combine the raw individuality of their Australian background with the exotic atmospheric sound kaleidoscope in a fresh and exciting way that has totally eluded all the other joss stick jokers around at the moment."

Steve Sutherland, Melody Maker, March 1982 "The Church, if I may be so bold, are absolutely fab and you're bound to just love their Bondi beach parties, their TV trips, their lover's tiffs and their posey paranoia."

Oh sod it, I'm not typing any more! I've been at it all weekend, my fingers hurt and these people are all saying the same thing anyway. Here's a list of the articles that are out there.