Miami Horror is an electro-pop act with a disco-house throwback style from Melbourne, Australia. 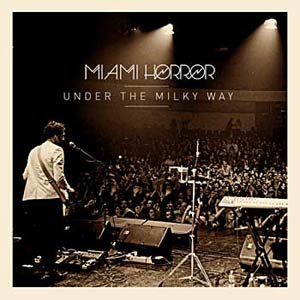 Here's a timeline of the creation of this cover from their Facebook page:

"SNICKERS® SESSIONS with Miami Horror and Phrase. The bands cover songs that aren't their style. YOU'RE NOT YOU WHEN YOU'RE HUNGRY®. Proudly supporting Heaps Decent."

July 10, 2011: "Hey guys we are taking part in the 'Snickers Sessions' in which we have to do a cover of one of three Australian songs as voted by you. All proceeds from the song go to the Heaps Decent charity. Snickers are also donating $1 for each vote!! They are hoping to raise $20,000 from votes alone..We really want to cover 'The Church-Under the Milky Way' SO PLEASE give it your vote. VOTE HERE: http://snickerssessions.com.au/."

July 20, 2011: "Holey Guacamole! The results for the snickers sessions cover song are so close, we know we've asked about 3 times but please throw your votes towards 'Under The Milky Way' for us to cover it! We have about 15hrs to go and its currently 50/50 with 'I'm Stranded.' http://snickerssessions.com.au/"

Aug. 1, 2011: "In the studio recording 'Under The Milky Way' for the snickers sessions, thanks everyone that voted! It's sounding good so far...."

Aug. 18, 2011: "Also, our cover of 'Under the Milky Way' is out now on iTunes with all of the proceeds going toward Heaps Decent!!! Have a listen on our 'Music' tab and then head to snickerssessions.com.au to see how we made it."

Info about this contest and cover is no longer at snickerssessions.com.au.