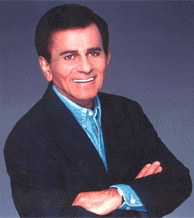 The Church Debut on American Top 40
with Casey Kasem

Week One - 5/28/88
Next is another Australian band debuting with their first Top 40 hit. They're called The Church, a four-man band formed back in 1980 in Sydney. Their sound's been called modern day psychedelic music, and they've built up quite a cult following over the last few years. Now they've made a top 40 breakthrough. Guitarist Peter Koppes [Casey pronounces it "Cops"] told writer Craig Rosen, "This is probably the best thing that could happen to us. It's a good introduction to a lot of people who have never heard us or never understood us before." End of quote. Debuting at number 37, from Australia, here's The Church with "Under the Milky Way." [...plays song...] The Church, from Australia, debuting at number 37 with "Under the Milky Way." First time on the chart for this Sydney band. It's from their album Starfish.

Week Two - 6/4/88
Now the answer to our record business riddle. Can a band find chart happiness after being dropped from three record labels, breaking up, then reforming only to be forced to work with producers they can't stand? It can happen, and it's the story of the Australian band called The Church. They're a four man band who got together eight years ago in Sydney. Not long after, they signed with an Australian label. After releasing their first album, an American label made a deal to distribute them in the States. They built up a following, but record sales were slow, so their American label dropped them. But another one picked them up right away. Then, after their next album flopped, that label dropped them, too. At that point their Australian company ditched 'em. Fed up, the four guys in The Church broke up, but soon after they decided to get back together and give it one more try. Good thing, too, 'cause last year, out of the blue, Arista records in America came calling. They wanted to sign The Church based on their cult following, but on one condition—that they work with a couple of studio pros in Los Angeles, the producing team of guitarist Waddy Wachtel and engineer Greg Ladanyi. It was like mixing oil and water. The Church's singer and bassist Steve Kilbey told the L.A. Times, "It was Australian hippies vs. West Coast guys who know the way they like to do things." [Casey chuckles...] The band and producers clashed. They even made Steve take vocal lessons, and he says, "I wouldn't say we came out of this the best of friends, but I don't think that's important. The record is the most important thing. The idea was for us to utilize their knowledge to make the record we've been trying to make for a long time." End of quote. Well, The Church's prayers were answered. They call the album Starfish that they made in L.A. their best yet, and it's given them their first hit. Moving up six notches to number 31 this week, here's The Church with "Under the Milky Way." [...plays song...] A band out of Sydney, Australia, The Church, with their first chart single, "Under the Milky Way." Debuted last week at 37, moves up this week to 31.

Week Three - 6/11/88
Next, at number 27, is a 4-man band from Australia called The Church. They've developed a sophisticated reputation over the years: a band with a brain. Critics call their music neo-psychedelic rock. How do they write such sophisticated, multi-layered, thought-provoking stuff? Well, one of the group's guitarists, Peter Koppes [Casey pronounces it "Copes"] says, "Simple. All four of us will be playing completely different music, and we'll stumble upon something we really like. So we'll stop and we'll record it." End of quote. Huh, works for them! Here's their first top 40 hit, "Under the Milky Way," The Church [...plays song...] "It leads you here despite your destination, under the Milky Way tonight." The Church, from Sydney, Australia, with their first top 40 hit here in the U.S. Third week in the countdown and it moves up four notches to 27.

Week Four - 6/18/88
These are the biggest hits on the Billboard chart by the world's biggest stars. And at number 24 is a hit song called "Under The Milky Way." Ever wonder why our galaxy is called The Milky Way? Well, a dictionary tells us the word "galaxy" comes from the Greek word "galaktos" which means "milk." And that's where it comes from. At number 24 here's The Church, "Under the Milky Way" [...plays song...] The Church formed eight years ago in Sydney, Australia. They climb from 27 to 24 with "Under the Milky Way."

Week Five - 6/25/88
Once a week with AT40 and you know how your favorite songs are doing across the USA, like the first hit by those neo-psychedelic pop purveyors from down under, The Church, at number 26. The Australian band from Sydney are singing "Under the Milky Way." [...plays song...] The Church: Steve Kilbey, Peter Koppes [Casey pronounces it "Cops" again], Richard Ploog, and Marty Willson-Piper. Their song, "Under the Milky Way," drops from 24 to 26. On American Top 40, I'm Casey Kasem.

According to "Joel Whitburn's Top Pop Singles 1955-1996" and "Joel Whitburn presents: The Billboard Hot 100 Charts - The Eighties" (both published by Record Research Inc.), these are the positions reached by Under The Milky Way: