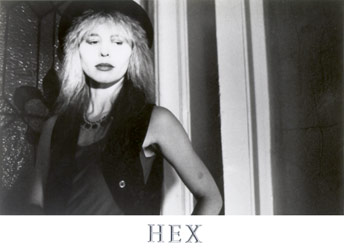 Hex is neither a group, nor an album, but rather the musical spirit that comes from the union of singer Donnette Thayer (formerly of Game Theory) and Steve Kilbey (bassist and principal singer and songwriter for The Church).

"It really started as an experiment," explains Thayer. "I'd given Steve some tapes of me singing, and he liked them, so he suggested that we do a song together. I thought it would just be a fun thing, but after the first song we did"--"Silvermine," included on the album--"the music started taking on a life of its own."

Kilbey's prolific songwriting often includes music that isn't intended for The Church. "I've always wanted to do an album with a female singer, but never found the right one," he explains. "Then I heard tapes of Donnette, and realized that she was the voice I'd been seeking."

During a break following The Church's Starfish tour, Kilbey and Thayer went into the studio to work on some musical ideas Kilbey had come up with while on the road. "The music started out as sequences," recalls Donnette, "but soon it began developing its own personality, like some character from a book that gets up and starts walking around the room." Working in various locations around New York City during the winter of 1988-89, the duo came up with ten songs that seemed to naturally coalesce into an album.

Says Donnette, "It was strange how Steve and I found ourselves thinking the same. I could really trust the way he'd express what I'd been feeling."

That magic is indelibly impressed into the tracks that became Hex, creating a spell that even brought about a name for their collaboration. "We were playing Scrabble one night, and Hex came up as a word, and there it was," says Kilbey.

Adds Donnette, "It was worth a lot of points, too."

Donnette Thayer is a scion of a venerable American family that includes both the founder of West Point and the first "witch" to be burned at the stake in Salem, Massachusetts. As a singer, guitarist and songwriter, she fronted the Northern California psychedelic band The Veil (which included future members of the group True West) before joining Game Theory, with whom she appeared on two Enigma Records albums--Lolita Nation and Two Steps From The Middle Ages, both produced by Mitch Easter--and performed on numerous national tours.

Steve Kilbey is internationally known as a songwriter, vocalist, bassist and co-producer for The Church, whose 1988 album, Starfish, brought them long-overdue commercial success, spurred by the Top 20 single, "Under The Milky Way." Kilbey has also recorded three solo albums--Earthed, Unearthed and The Slow Crack--as well as publishing a book of his writing--also titled Earthed--that accompanied the album of the same name. 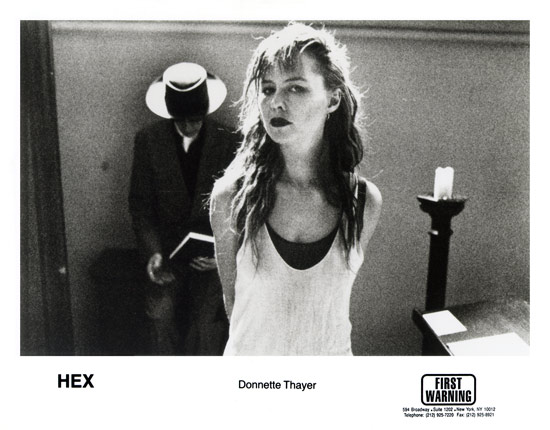