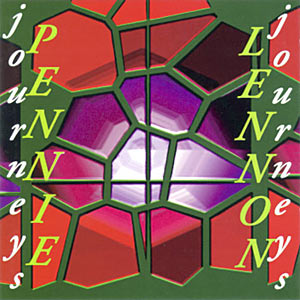 Pennie Lennon's Journeys was recorded in 1997 at the Karmic Hit Studios in Rozelle, Sydney although it was officially launched in November 2000 at Glebe Town Hall. The album was produced by the Church's songwriter/bassist/lead singer Steve Kilbey, and features performances from Kilbey on bass and Church drummer Tim Powles on drums and percussion. Pennie herself plays piano and sings and Davis Jade Sparx features as guitarist. There are also vocal contributions from Sandy Chick on backing vocals and Steve Kilbey on lead vocal in one song.

Journeys is Pennie's first full-length album release, riding on the back of her debut EP Healing Bones of 1995 and the magnificent Live at Karmic Hit of 1998. It's not in the least surprising that Pennie has struck up a rapport with Steve Kilbey who had subsequently offered to produce her, for both songwriters share that shimmering quality of creative spark and magic that marks their respective compositions. And like the most gifted of painters who are able to create feels and moods and nuances with the subtle stroke of a brush, Pennie herself is a true tone poet with an acute ear for sensual, harmonic feel and colour. Her songs evoke moods and feels that are sensually astral in tone and flavour. Sometimes her songs remind me a little of Kate Bush although Pennie has the double whammy over Bush in that her songs are more grounded in structure and harmony yet are nontheless more evocative and impassioned. So Journeys is a thematic vignette of ten luminous compositions of alternating light and shade that deal with the artist's coming to terms with a newly discovered inner space of being and poise. The lyrics are often peppered with "new age" phrases although I prefer to use the term "truth principles', with a subtle thematic emphasis on eternity reflected in the timeless now, and how the inner state creates external circumstances. The firm yet gentle, etherial nature of Pennie's lyricism comes through in the mood of the album as a whole.

The title track Journeys commences the album and this is the track that seems to have the most Church-like production to it. The intro sounds very 90's Church, Davis Sparx's guitar manages to successfully capture in sound and spirit the Koppes/Willson Piper synergy that hallmarks the distinct Church sound. Note too Powles' creative percussive drumming that runs through this track and the album as a whole, rendering his influence on this album in a not too dissimilar way to the Church's Magician Among the Spirits album which had been recorded a year earlier at the same studio. 'Journeys' is a powerful sweltering track that has a Kate Bush feel, some potent harmonic movements and a heavily compressed and reverbed vocal that is somewhat buried in the mix to good effect. Very tasteful and some great guitar work throughout by Davis Sparx.

The Church's rhythm section start Madonnas of the Wall and they in fact sound very Cure-ish circa 1981's Faith album with that droning bass and processional drums. This is a most evocative track, of Georgian mansions, arresting renaissance paintings, dust-motted afternoon light penetrating empty gothic hallways. And while complimenting the album's music totally, Bruno Koenig's brilliant and attuned artwork is particularly reflected in this song - purple hue covered images of stained-glass windows underlying the lyric sheet. Note too the cover, stained glass windows covering a hologram of one pointed light. 'Madonnas of the Wall' features verses in C minor going into AbMaj7, then G, but the move into the chorus (Eb - Ab minor) is most striking, reflecting Pennie's talent for hitting the right chords at the right moment to create feels that take the listener totally away into the world of the song.

In Buses and Trains is a jazzy and surreal observation of life's movements, going from the surface analogy of buses and trains to people's lives and emotions, and then to the author's outer and inner life. The gentle ethereal quality of this song reminds me very much of another truly magnificent song which shares a common theme with this one, 'Saturday Sun' by Nick Drake. 'In Buses and Trains' is a gem, ethereal jazzy vocal movements sliding over CMag7-Dmin7, then the sharp turn into Eb-D7. Jazzy yes but with that subtle timeless element of European impressionism, a bit of Debussy there, even Berlinesque Kurt Weill. Pennie's ambiguoudly haunting line, "...God I hated being single, till I found myself / I easily lose myself everyday..." I find lingers with me long after the song is over. A beautiful and gentle song, wistful, elegiac and spiritual, a true gem.

Is This the Way It's Supposed to Be is a happy affirming song with a triumphant emphasis on attracting love into one's life. Well performed and produced, some enhancing strings and guitar figures during the minor key section ("...winds of change...") and (especially guitar) chorus. A great ending with a positine and joyful coda, "...you came to remind me to love...". Don't Be Afraid follows on from from 'Is this the Way...' and carries the theme of shredding the past and growing in the Now. Like 'Is this the Way...' it's well produced, reflecting strong affirming melodies and lyrical sentiments.

Spiders Eating Flies features a solo piano/vocal performance from Pennie. The intro and corresponding verses are very Joni Mitchell in flavour, the intro is similar to that of Joni's 'My Old Man' from her classic Blue album of 1971. The chorus with its corresponding key shift features a heavily reverbed and expansively sung vocal which serves to reflect the impassioned lyrics of this section before moving back to the original key (F# - A) for the verse. 'Spiders Eating Flies' gravitates between the enchanting innocence of the verse, and the impassioned, reaching choruses. A lovely song, masterful; the little chord at the end there, the dominant seventh in the piano's upper register is something of a chuckle, a musical smile from Pennie.

Knave of Night was co-written (lyrics) with Steve Kilbey who himself sings the track. His voice is in a higher register than what Church fans are used to although his vocal track is buried in the mix so that the lyrics are fairly inaudible. This is nonetheless a comically enchanting piece with an English medieval flavour and in some way is not too dissimilar to what the Church were doing on the The Blurred Crusade of 1982. The synths (strings and organs) carry the melodies on this tune and there's a rousing movement into the minor key there, an example of fine musicality, all very knightish and again, a great tune, ennobling and affirming.

He/She features a rolling minor-key piano pattern with oboe countermelody (could be synth). The lyrics reflect the ideas of purity, karma, the intrinsic power of the mascline and feminine principle, and the power of 'God' which rests within one's own heart. The minory feel and oboe are reminiscent of Nick Drake, similarly there's that distinct misty moorish Englishness and is quite Gothic in that context; and again like nick Drake there's that vibe of otherworldliness to the song, it's quite psychically dramatic, palpably evocative. 'He/She' details that all that is ancient or present as myth is present now within one's own being. The striking key shift in the middle of the song adds to the drama and feel.

Shine Your Light on Me with its gospelly title is interesting given that although not conventially a gospel tune there is nonetheless a distinct white gospel flavour running through the song. Tim Powles' distinctly percessive drum pattern adds much to the song, as does the Fender Rhodes/organy sounding keyboard (or is that the guitar??). 'Shine Your Light on Me' is absolutely superb, a straightforwrd melodic masterpiece featuring radiant, inspiring lyrics and a wonderful hook, the perfect 'soul' song. Something of a prayer, this song is immensely stirring and the innocence and purity of sentiment carries through like sunlight and the sweetness of someone's smile. Adorable lyrics pervade: "...the place that your standing / is the place you're meant to be...help me to forget the past, help me to be free . shine your light shine your light on me...". An absolute Gem Pennie, absolutely.

The instrumental closing track Seance is a conciliatory affirming piece that reminds me somewhat of the instrumental title to Brian Wilson's/Beach Boys seminal Pet Sounds. Different styles of music surely yet similar in sentiment and flavour. 'Seance' features a nicely satisfying piano motif in the Ab - Eb verse passages before moving into the stormy sturm-und-drang Cminor passage which features strong emotive playing from Kilbey and Powles and some heightened strings. Pennie suspends the emotion there by hanging on to the Fmin6 before moving back to the conciliatory Ab verse. However, the coda shifts key again with the ensemble moving into Dminor. Davis Sparx closes the song with his strumming of the Dmin6 chord leaving matters in an underlyingly ambiguous state, almost as if to say the 'journey's' only just begun, a sense of having totally suspended the past and moving to a new future without knowing quite where, almost like moving into the womb of a new birth. Brilliant and evocative and a great instrumental, a perfect way to end the record.

I'd recommend Pennie Lennon's Journeys not merely to keen Steve Kilbey watchers but also to those who love music and have a strong feel for harmony and spiritual sensuality. Few songwriters (including the classical masters) match Pennies gift for evoking moods and feels quite like she does. She's simply a most fine songwriter of class and distinction and it won't be at all surprising if her work begins to attract a sizeable international following.