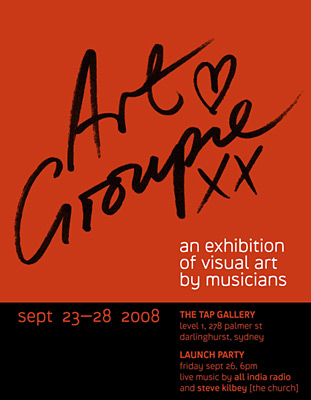 From Sept. 23-28, 2008, Steve participated in Art Groupie II, "an exhibition of visual art by musicians," at the Tap Gallery in Sydney (Darlinghurst), NSW, Australia. He exibited two paintings: Ricki Maymi 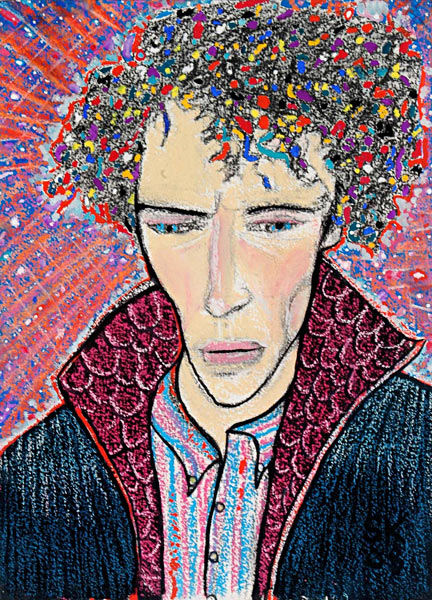 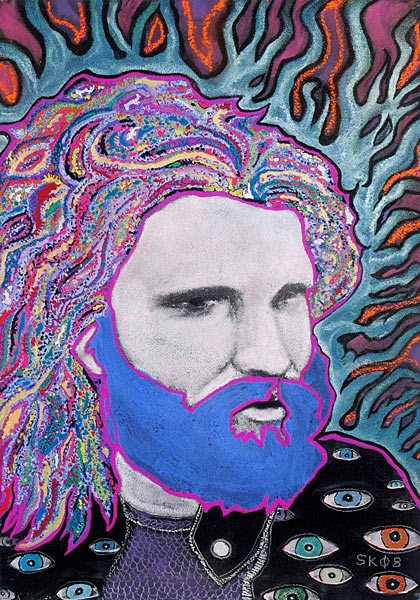 A 2-CD set was given away to attendees at the launch party, containing tracks by participating artists. See below for details.

Exhibit Advertising Card (roll over or tap a thumbnail for a larger view):

Exhibit review from musicfeeds.com.au, with a couple of quotes from Steve:

An exhibition of artworks by 29 Musicians, Producers and DJs who also make visual art, presented by Groovescooter Records and da dAdA imprint, as part of this year's ANODE festival.

This is an intriguing exhibition of what may at first seem an unlikely selection of artists. As one explores the exhibition space and examines the variety of works and media used in this exhibition of paintings, photography, mixed-media and interactive sculpture, it becomes clear that at the center of this show there is a reminder and affirmation of the diversity of creative expression.

This Exhibition is thought-provoking and illuminating, with depth that reveals itself in layers. Alex Crowsfoot's Thieves Like Us at first glance is a haunting portrait, but more time spent with the work reveals that it is a comment on the illegal downloading of music. "We are losing something from music culture that to me has been very important--sleeve artwork, record shops, trawling through racks of vinyl in second hand shops and so on--and that this is leaving a ghost in our culture because it's not really there anymore."

Nick Wishart and Jodi Rose's created an interactive installation, The Singing Bridge, made out of various materials including a theremin, door bell and model bridge. Audience members were invited to touch parts of the work in different combinations to make sounds. Wishart commented that, having a child himself, he is now more aware of the 'do not touch' policy in art spaces. In creating The Singing Bridge, Wishart desired to make art and musical instruments accessible to anyone.

One wall of the gallery contained the atmospheric and accomplished photographs of two artists, Heide Elva and David Kagan. Heidi Elva produced two triptychs of photographs, soft focus images of lights and silhouettes, titled Night Time in Brisbane Series and The Sunset in Lismore Series. When asking Elva about her choice of subject: "I do romanticise things and create something poetic from what is around me, the lighting is important in creating an atmosphere"

David Kagan describes his photograph of a bird suspended in flight, titled Suspended Animation, as "a fluke, taken straight from life." Both his music and art contain "an element of whimsy, neither take themselves too seriously. It's about enjoyment and expression."

Amanda Cole, who creates work from everyday objects and recycled material, produced an amazing series of intricate drawings on envelopes for this exhibition. When describing her work, Cole, an Art Music Composer, clearly describes a strong link and the similarity between making Visual Art and Music: "...when composing, my patterns are fitted to an underlying grid, which is pulse. When drawing on the inside of envelopes there is also a set grid, which is the printed security pattern. I enjoy discovering new security patterns that I can use to superimpose my own patterns on."

The most colourful works in the exhibition were by Steve Kilbey: Jim's Mirror and Ricki Maymi, gauche and pastel on paper. The images seem to contain a psychedelic, possibly even esoteric element. When asked about this Kilbey responded, "I'm just trying to paint the stuff that's impossible to really paint, at least I don't know how to yet. And in my struggling I stumble upon what I do."

Finally, the question had to be asked about the difference between making art and music, especially as a touring artist. One can only imagine that playing songs over and over can possibly get a little jaded. "I find painting SO much more fresh and impulsive, and I love the fact I don't have to explain anything to anyone as I do it. It's also much less involved in electronic malarkey" says Steve Kilbey.

This set of CDs was given away free at the launch party for Art Groupie II (see above). 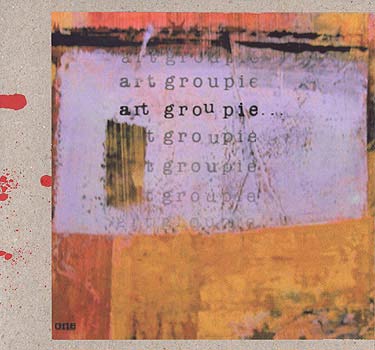