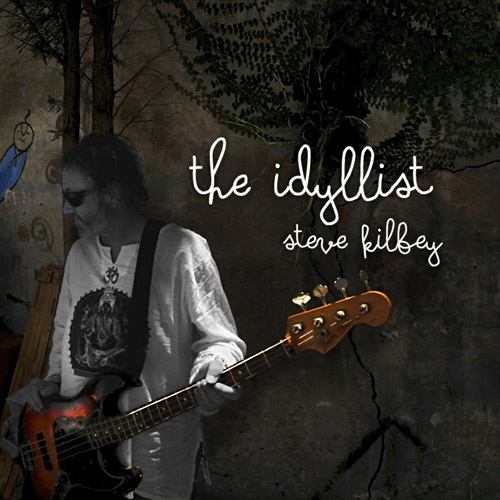 Written, Composed, Recorded, Produced and Mastered by Steve Kilbey
Art and Photography by S. Mayfair
Distributed by The Time Being Records

Songs from a lazy summer, songs that write themselves, songs that fall out of the blue & into my head, songs that you catch in the ether, little strange songs, songs looking for a home, songs that float on the breeze, songs containing sand & sea, songs that I wrote unintentionally, songs that are just songs. Steve's first offering for 2013, The Idyllist is now available for preorder, delivery is 1st February 2013. The first 100 people to purchase The Idyllist will also receive a free 11" x 17" limited edition poster, signed by SK.

CD art comes to you as a 'Green Forestry Sleeve'. Made with 100% Green Forestry Practices Certified board only and using 100% vegetable inks. We here at TTB Headquarters care about what happens to our planet.

Steve wrote this about this album in his blog several times:

so the idyllist is finally coming home to roost
the sound of a gnarly gnarled old songwriter goofing off alone
a bunch of random songs signifying whatever the usual thing is
i just dont know what to make of it
and i'm curious to hear yer opinions
is it good or bad or worse still, average....?
its just what came out
if i did it now it would all be different
i would never have written these songs before or after the last few months of '12
so here it comes shortly off the old turnaround
some will love some wont
thanks anyway and goodnight

well you can get it right now in fact
here i am shamelessly touting my latest record
"trying to earn a living off an LPs worth of tunes"
my new record.... its a win / win situation
i need the $
you need the !?
its that simple i'm quite prepared to guarantee you like it
or i'll beat my words
have a listen
its music to have a laugh to
its available now
SKPers getting codes tomorrow
cd ships in about a week god willing
i'm excited
i think when you hear this you'll be surprised by the dualities it contains
its never all of just one thing
variety pack
you got rockers you got ballads you got your noise and your tunes
you got sitar viola fender jazz bass tambourine guild 12 ac
you got your reverb fuzz mist and smoke
you got your pop song your rock song your folk song your joke song
you got yer vox humanis you got your footstomp and thunderclap
you got yer silly sad stupid symphonic bits
the screechy scratchy guitars the plumping bass baby yeah
some sexiness in the bass department (one hopes)
man i can fucking strangle a guitar (one trusts)
dude i rock like freaking mofo on angelfruit (its implied at least)
i am a student and master of this thing now
still learning
still gotta long way to go
this is a new day for my music
back to the purity of my solo records from the 80s
(thats a contradiction)
this record is comfortingly strange and wildly familiar
the simplicity and the complexity will astound you
i keep squeezing blood from those same old stones
then i break away into new lands new atmospherics its hard to review it
i just listened to it all the way thru on the headphones for the first time
i hear its minor triumphs and failures
i see in deeper meaning in shallow shoals of sound
the idyllist is a good record
i shouldnae have sold it short
it is a good record and it has good vibrations
some new stylisations some old tricks and hi jinks
the idyllist
i proudly present it to you all

so why the idyllist?
and all i can really say is
i think it may make you smile for awhile
its silly its stupendous its preposterous its...cosmic rock...
its noisy its warm n cosy its out there its in here
how amazing i never succumbed to her-0 in
and i'm still around doing this
fucking enthusiasm...man its there in buckets..its gushing vim...
it aint no tired old lame brain kilbey by numbers
it contains all my obsessions beatle dylan bowie bolan floyd etc
its derivative and original at the same time
i love those contradictions
its messy and accomplished
its everything its nothing
plus theres some good singalong numbers
if you wanna hear someone unwearied by age here i am
at almost sixty i have experience and enthusiasm
that is the idyllist
smart enough to know better you could say....

The working title of this album was "apocrypha".