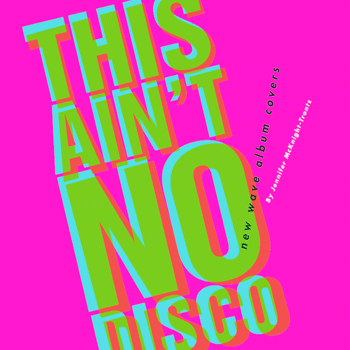 "This Ain't No Disco: New Wave Album Covers by Jennifer McKnight-Trontz is a collection of over 300 late '70s to mid-'80s New Wave album covers. Two Church album covers are featured: The Church (1982 - Capitol) on page 140, and Of Skins and Heart (1981 - EMI Parlophone, though attributed to Arista) on page 149.


From the back cover:

"Skinny ties and Nagel prints. Pegged pants and synth pop. Neon-colored hair and androgynous cool. Ruffled shirts and rubber bracelets. New Wave in the 1980s had a style and sound all its own, This Ain't No Disco celebrates the good, the bad, and the what-were-they-thinking in a visual romp through the best album covers of the era."


From the front flap:

New Wave was defines not just by the music, but also by the styles, fashions, and graphic design of the artists and albums of the time. A dizzying array of wild hairstyles, futuristic typography, pastel geometric shapes, and outlandish clothing, This Ain't No Disco celebrates the best and most memorable New Wave album covers from the late '70s to the mid-'80s.

From one-hit wonders and wannabes to cult favorites and smash successes, these are artists and images that defines an era. Witness the flamboyant and androgynous dress of Boy George on Culture Club's Colour by Numbers or Adam and the Ant's Prince Charming; the retro-futuristic vibe of the B-52's Wild Planet; the trendsetting look of the Jam's skinny ties and slim suits on In the City; and the startling combination of high-tech graphics coupled with a classical work of art on New Order's Power Corruption and Lies.

A nostalgic trek with a mental soundtrack, This Ain't No Disco is chock-full of page after totally awesome page of images—250 albums in all [actually over 300]—and celebrates a style that continues to influence music and fashion today.