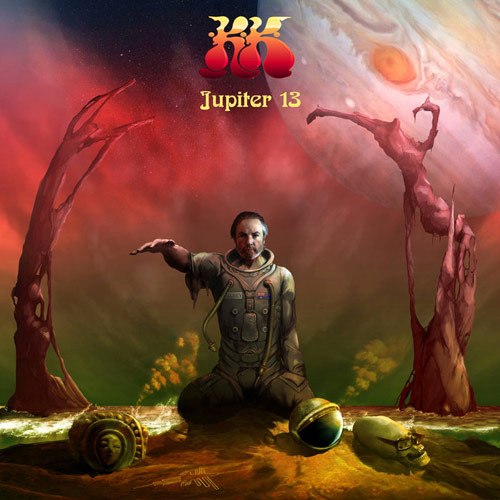 Written and performed by Steve Kilbey and Martin Kennedy

Jupiter 13
A foreseeable calamity. A triumph of science.
The last straw. Not what you think it is.
A top secret. Mans basic inhumanity to man.
The impossibility according to physics. Events trigger matter.
An infinite regression. A preventable catastrophe in the future.
Investigations are underway. Call girls. Drugs. Photographs. Blackmail.
Theft of dangerous materials. The underworld. The dark web.
The manipulation of dream. The war we waged on each other and the aliens.
Ray Guns and particle acceleration. The charge that blew apart the mains.
Witchcraft and black magic. Playing around with Anti matter.
The ordinary man in the street, a day in his life.
The memory of phone calls never made.
Komarovski do you read me.
The colonel in the gentlemens club sloshed on gin. Debris orbits a tiny moon.
Richardson is on the phone: we wanna talk to you about Jupiter 13.
Yeah I bet you fucking do!
Still there is music. Attack...Decay...Sustain...Release...
Richardson hangs up somewhere in the past.
Time travel has been happening but the yanks won't give us our go.
And we chucked in all that money.
Martin prepares an escape pod which will double as his recording studio.
He will float unconscious dreaming up symphonies that will be recorded by the software encoded in his spine.
Stefan H in Germany will know our mission is over and will play
one last lasting sweeping arpeggio which will signal the curtains.
A disaster. A mistake. A miracle. A mystery. Jupiter 13.
One hundred years until they open the files.
Goodnight.
Im trapped in the airlock and theres no gravity.

The relics are all to do with a "Chariots of the Gods" theme. Why they all got there is up to the viewer to figure out...perhaps the ancient gods come from Jupiter's moons? The alien skull has Martin Kennedy's glasses on to involve him in the painting...his idea and a good one. I was originally going with the astronaut having the helmet on but Steve wanted his likeness in the painting so the helmet had to come off...I guess we have to assume there is an atmosphere. His arm is extended just for compositional reasons to match the rock formation in the background.

The line drawing on the ground in front of astronaut Kilbey is a recreation of the ancient Nazca Line Hummingbird ("El Colibrí") geoglyph located on a plateau in southern Peru, which measures 96 meters x 66 meters.


The Story of Jupiter 13 by Dan Helgerman