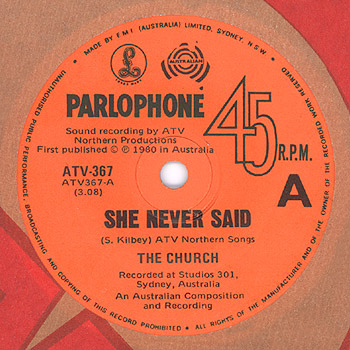 This is The Church's debut on vinyl. She Never Said was re-recorded for the Of Skins And Heart album. This version is only available on this single.

Part of the deal between ATV Northern Songs and EMI includes reviving the old Parlophone label, the last act they had being The Beatles. The first single on the label will be by Sydney band The Church, and Edith Bliss's newie will also come out on Parlophone.

Roadrunner Magazine reviewed the single in early February 1981 with this morsel:

The Church inspire little faith in their future progress with a mild-mannered mix of solid beat and waffley keyboards.

In A Heartbeat Fan Video