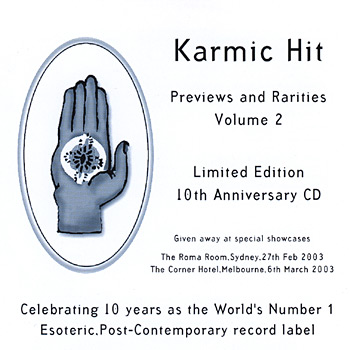 Appearing on the night...

In case you haven't heard these...

These were originally released in conjunction with the Karmic Hit 10th Anniversary shows (Feb. 27, 2003 at The Roma Room in Sydney, and March 6, 2003 at The Corner Hotel in Melbourne). The first two hundred ticket buyers for each show received the CD free. In April, 2003, this CD was offered free to the first 100 Karmic Hit mailing list subscribers who placed an order with them (either by email or through their online Mall of Convenience).