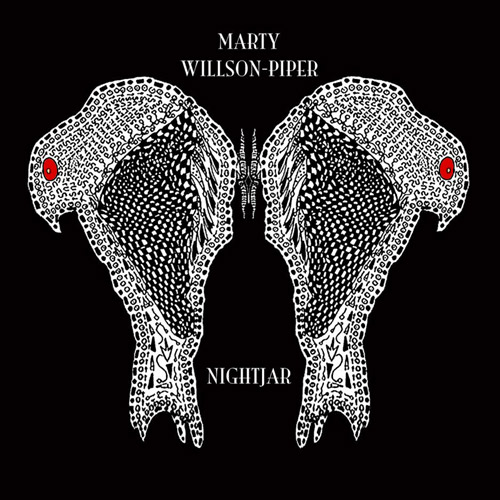 Additional Recording
Jeremy Boyd: Piano on Lullaby For The Lonely, Feed Your Mind
Graham Lee: Pedal Steel Guitar on The Love You Never Had

All Songs Published by Interference Music

Marty Willson-Piper has an eloquent new album. Nightjar is set for imminent release in North America on Second Motion Records in conjunction with Marty's own In Deep label. After two diverse albums from his on-going Noctorum collaboration in 2003 & 2006 respectively, it has been some time since the last solo studio album Hanging Out In Heaven in 2000. Although In 2004 Marty released the 22 track solo Live From The Other Side album, he soon realized that 10 new songs had "crept up on him in the night" and had been featuring in live sets but hadn't yet been recorded. Songs like the poignant "Feed Your Mind," the melancholic "Lullaby For The Lonely," as well as other new live favourites such as "I Must Have Fallen" and "The Love You Never Had" performed by the Mood Maidens at various shows in Australia in the past. The ironic country of "A Game For Losers," the trenchant blast of "Song For Victor Jara" as well as one unrecorded old acoustic gem "More Is Less" and two brand new songs, the epic and unnerving, "The Sniper" and the powerful album opener "No One There."

Featuring a scintillating cast of Cornish talent and moody guests from Australia including the vulnerable tones of the Swedish/Polynesian Tiare Helberg on vocals, the soft twang of Triffids' Graham Lee and Cornish Queen Julie Elwin's musical finesse and vocal otherworldliness. With a striking cover drawn by MWP himself and produced in England with old cohort and music collaborator, "the technical poet" Dare Mason. This is MWP's most lyrically personal record to date. Nightjar is a collection of stories of loss and hope, adverturing into complexities of the human condition through the labyrinths of self-doubt and confience. You'll never have to see your therapist again.