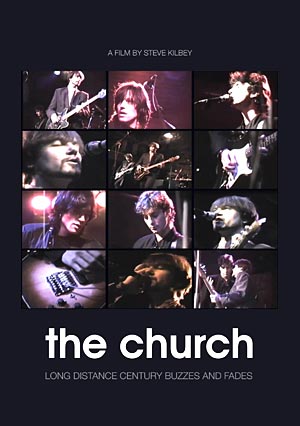 This is how Steve describes this video:

In 1990 I bought a new fangled super 8 camera, and filmed bits and pieces of a world tour that took in Australia Europe and North America . The tour started in April and ended in August and was over 60 gigs played in all. We touring in support of our latest album 'Gold Afternoon Fix', which was only doing moderately compared to the previous record 'Starfish'. Richard Ploog is no longer in the group, and our guest drummer for the tour was New York musician Jay Dee Daugherty, who had been much recommended to us by Tom Verlaine. He proved to be a great addition, and he stayed on to play on our next record. You can see a bit of that at the beginning of this video, which in true Church fashion starts in the future.

I filmed over 13 hours of raw footage on that tour. There is much disproportionate footage ie I shot about 2 hours of us eating lunch in some hokey American restaurant, but there is no footage at all from Sweden or Switzerland. Of course eventually when I got back to Sydney the last thing I wanted to do was watch us all over again and I put my video cassettes away. During the nineties I vaguely attempted to get the project rolling. The logistics of editing a video in 1990 were a whole lot different than today. Just like recording. Video editing was expensive and time consuming, and it could not be done at home. So it got shelved until this year. So here it is.

Some caveats for you to dig, however: the actual video tapes were somewhat aged and there is sometimes a jumpy quality to some scenes. The cameras mic couldn't handle the loud music of the church and the sound is a bit distorted. Plus whoever was filming the various gigs often just cuts from one song to another right in the middle, there was nothing I could do about this. Also there is a lot of jerky filming, I hope it doesn't make you seasick. Forgive me I knew not what I was doing. I knew nothing of cameras and filming. Still, I hope you enjoy this little slice of history. It was a real pleasure making it, even if it took 23 years. Now go forth and watch it!

The title "Long Distance Century Buzzes And Fades" comes from a line in the song Grind, the last track on the album Gold Afternoon Fix.