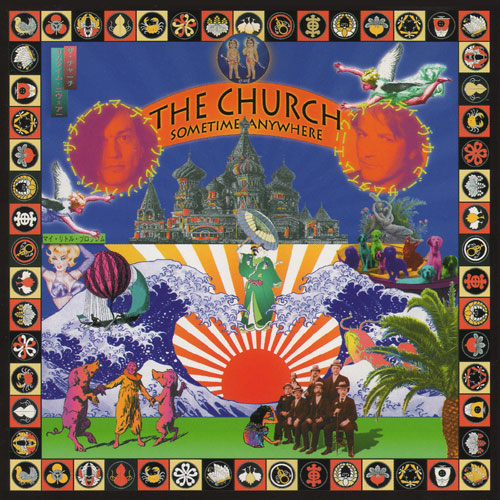 * "Angelica" and "Two Places At Once" sung by Steve Kilbey & Marty Willson-Piper.

Translations of the Japanese writing on the album cover:

The Hindi writing under the picture of the two Indian boys (just above the orange title banner) means "Do Bai" or "Two Brothers."

All releases prior to the 2016 Plain Recordings 2LP of Sometime Anywhere that list track times erroneously list "Lost My Touch" with a running time of 5:40 instead of the actual 6:31 length.

Morten Skjefte received a hand-written letter from Steve Kilbey on 1 Nov. 1993 with the following info:

There will be a new Church l.p. called "Sometime, Anywhere" released in Jan/Feb 94. The first 25,000 copies will have a free C.D. with 8 new songs, included is a song called "Drought" which was recorded in Amsterdam in 88 with Ploog still in the group. You hear a little bit on those in between excerpts on our video goldfish. Its been lost for 5 years and has just been turned up. The master tape has been lost and we have to release the monitor mix of the song which luckily isn't too bad. Peter Koppes is out of the group simply coz hes "had enough". Who can blame him? Marty + I did the album ourselves with him playing 75% guitar and 25% bass and me vice versa. An Australian drummer called Tim Powles played drums on all but 2 tracks. He is a great drummer. Marty + I produced it, Dare Mason co-produced + engineered + mixed it. It was recorded at my studio "Karmic Hit" and mixed at 301.

The songs are: Loveblind, Day of the Dead, Angelica, Fly Home, Two Places at Once, Lost my Touch, Lullabye, Cut in Two, My Little Problem, Dead Mans Dream, Time Being, Eastern, The Maven.

The Free L.P. entitled "Somewhere Else" will contain the following. "Business Woman, Drought, Macabre Tavern, Authority, Myths you Made, Leave your Clothes on, Freeze and Burn.

Arista rearranged the tracks before the release date without the band's consent, moving "Cut In Two" and "The Time Being" to the bonus disc, and "Business Woman" and "Authority" to the main album. 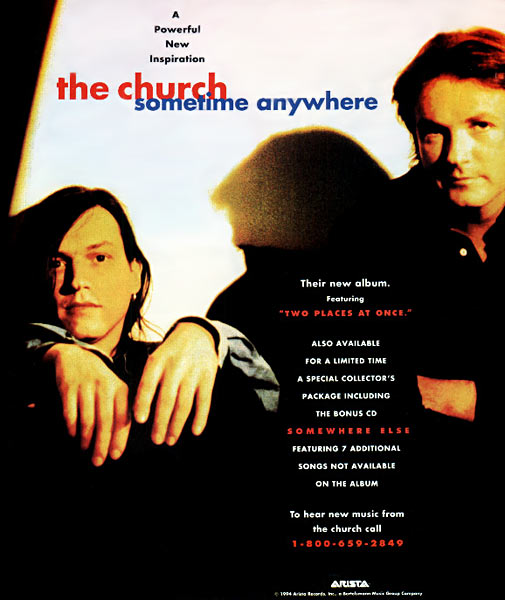 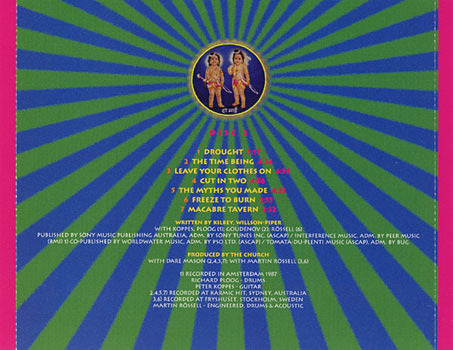 Some copies of the US release of Sometime Anywhere came with a mail-in offer for Somewhere Else. 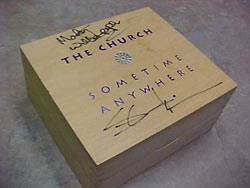 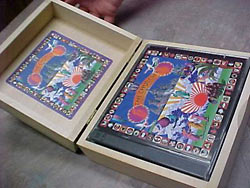 A limited edition promo box set was released in the US prior to the album containing:

On release, a Sometime Anywhere/Somewhere Else Limited Edition 2CD set was given to box set owners to fit in their box. Many of these box sets were autographed by Steve Kilbey and Marty Willson-Piper.


A promotional mug was also produced.