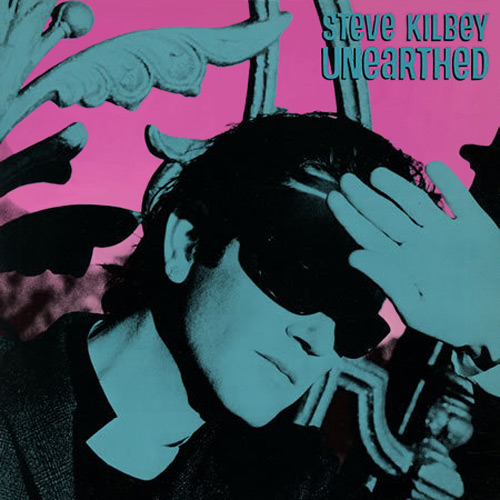 Vinyl Run-Out Groove Messages
LP Red Eye RED LP 1 (Australia)
Side 1: HERES ANOTHER CLUE FOR YOU ALL, THE WALRUS WAS STEVE.
Side 2: SHOULD BE LISTENED TO IN THE BEDROOM+OUT OF IT

"Steve Kilbey's debut solo album finally available again! Considered by most fans as his defining solo album, this long out of print wonder is with us once again. Includes four newly found tracks from the Unearthed era. All music digitally remastered from original source material. All new packaging and liner notes." - Karmic Hit Web Site

* Never before released on CD

Unearthed! Yeah, can you really dig the true vibrations of this whole thing, baby? As much as the trees and the stars, you have a right to pursue happiness and do your own thing, right? Out of this world, man, I mean, can you grok that? Are you ready? Are you really ready? And is your readiness real? You see, it's all emptiness. The in-breath meets the out-breath in space and then God descends down your chakras and explodes in your heart. Connected up! Wham! You pick up your guitar and play, just like yesterday. I am redirecting maya at will here, people. Watch this. Watch out. Look 20 fucking years went by while you were pulling the cellophane off.

Once upon a time, someone wrote some songs and recorded 'em. Big Deal! No wait... this song here, it's about something, something that meant something to me when I was someone getting somewhere.

With all the flourish of an arpeggiated E minor seventh, this song gave me hope that I wasn't alone in this lonely uni-verse.

Oh brother, this isn't making any sense. I can tell I lost you miles ago. When I was tuning the bass you slipped off elsewhere and by the time I'd bounced the backing vocals together you'd reincarnated as mute-palm ostinato on somebody else's test pressing.

Why all the hatred and killing, brothers and sisters? If only they could hear that peaceful song about the good spirits that haunted a mandolin that I pawned to pay off my colour deluxe, new Australian Idiom Bible that had the picture of Judas Iscariot that looked like that singer who died just before his version of that very song was banned for its blatantly peaceful content.

My Auntie Lu-Lu used to say —
"Listen little Steven, there's two things wrong with rock'n'roll..."
(of course, she said "rock and roll" but it looks better written the other way)
"Oh yeah", I impertinently sneered, "what's that?"
"Well, for one" she said, "you can nae understand the words."
"Ah ha — but what about opera?" I schmirked.
"The other thing is it'll send ya deaf."
"Ha ha!" I said.
She was right.

So, if you got it cranked in those direct-feed-on-backwards-phase-cancellation-headphones, then Karmic Hit takes no responsibility for any damage you might do.

So yeah, I wrote this song about the meaning of it all, how we are all expansions of a brilliant, amazing Godhead and how to get my baby back in my ever-lovin' arms.
Hey, I played all these instruments myself, dude.
Lead guitar, rhythm guitar, acoustic guitar, solo guitar, nylon guitar, bass guitar — it's incredible how many different instruments I have mastered.
I am the renaissance man in the winter of my discontent, hummin' and a-strummin' all over God's world.
Look, do you think you'll ever read this blurb again?
Can I be real honest with ya?
The guys here at Karmic Hit ain't interested in your cash or your credit card.
That financial thing is just a front.
This record has, is and will, change your life.
They all know that.
Everything before this was just a rehearsal.
You see, they had to go back to the beginning to attain a final resolution.
That's why it took so long. That's why it came last, dontcha see?
This record had to come out remastered + with extra tracks so the manifest universe could begin to resonate with the love K.H. has specially encoded into this music.
All for your listening pleasure.
The joke's on us.
You are probably even now, already reaching enlightenment just reading these liner notes.
Yes, do you feel it?
Breathe in.
Breathe out.
Feel the immanent-liquid-love plasmatic-cosmic, all knowing, all healing flood blow your tiny, tiny mind.

Oh and try to ignore the drum machines.
I'm sorry.
I just wasn't allowed to record a drum kit in my front room, the neighbors got all infuriated over it and de-tuned my rhythm guitar.

Anyway, who knows where the road will lead us?

Only a fool would say..... softly.... as I leave you, to enter the Karmic Hit Prayer Room and offer libations to the Hindu Gods of Love and to our Japanese sponsors, I can only wish for nice weather tomorrow and hope no evil corporation tries to suck off my royalties and spit out the broken bits of my life.

I bid you all a fond adieu.